What is the Difference Between An Expensive and An Inexpensive Motor?

What to Expect from a Motor: Rotary Motion

Torque is the strength of rotation. The unit of torque is N・m, but in the case of a small motor, mN・m is common. 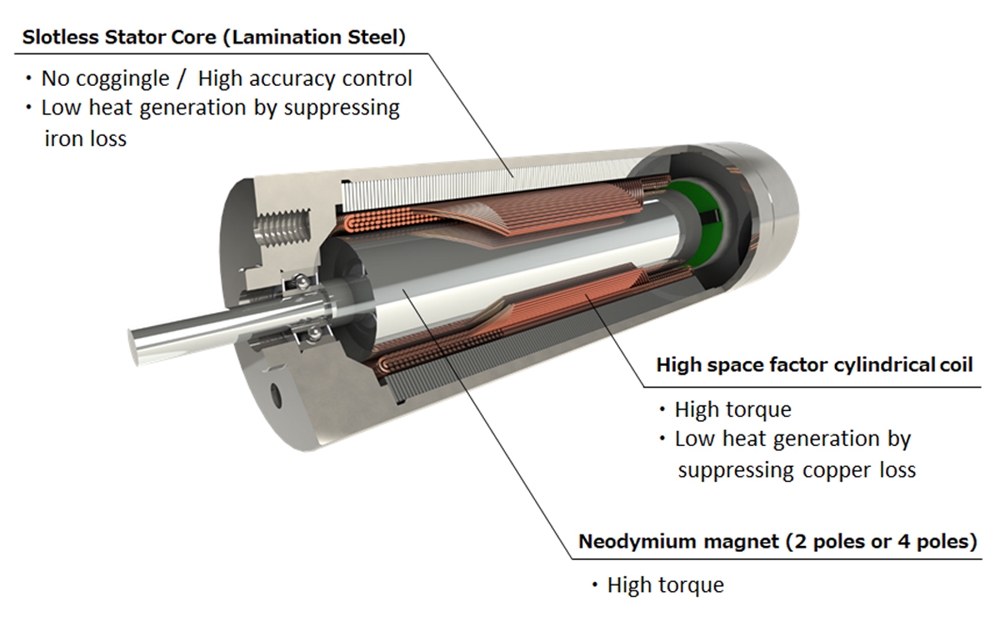 The motor has been devised in various ways to increase the torque. The greater the number of winding of the magnet wire, the higher the torque.

Since there is a limit to the number of times it can be wound into a fixed coil size, a magnet wire with a larger wire diameter is used.

Our Brushless Motors (BD Series) have a lineup of 5 types of outer diameter sizes. It can be seen from the diagram below that a higher torque can be obtained because the coil size also increases as the motor diameter increases. 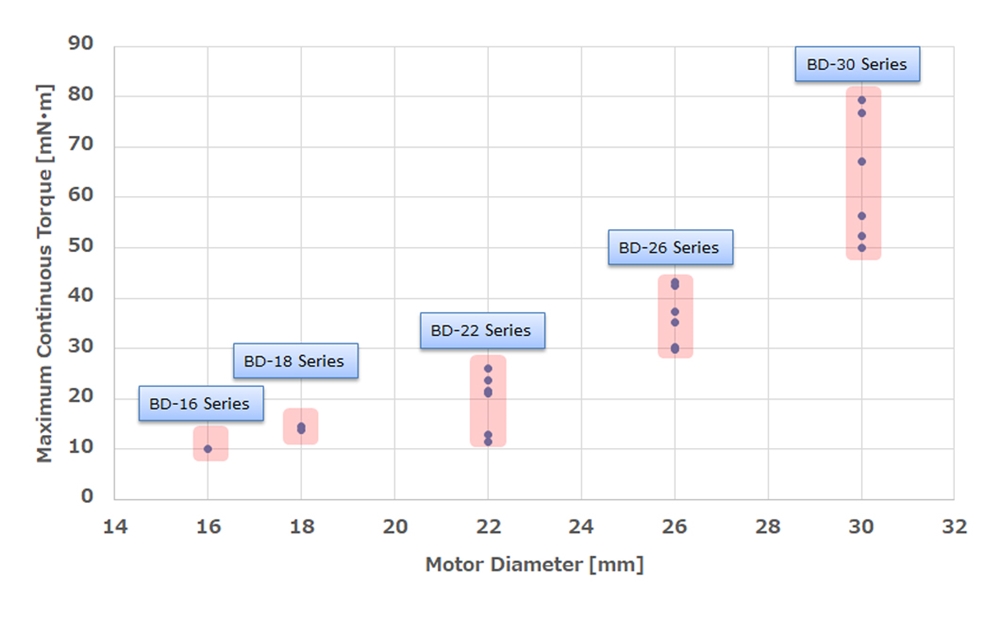 A strong magnet is used to generate a large torque without changing the size of the motor. Neodymium magnets are the most powerful permanent magnets, followed by samarium-cobalt magnets. However, even if you just use a strong magnet, the magnetism will leak from the motor, and the leaked magnetism will not contribute to the torque.

In order to make the best use of strong magnetism, a thin functional material called an electromagnetic steel plate is laminated to optimize the magnetic circuit.

The revolution of a motor is generally called as the "speed". It is the performance of how many times the motor rotates in a unit time. Although ‘rpm’ is generally used as the number of revolutions per minute, it is also represented by ‘min-1’ in the SI unit system. 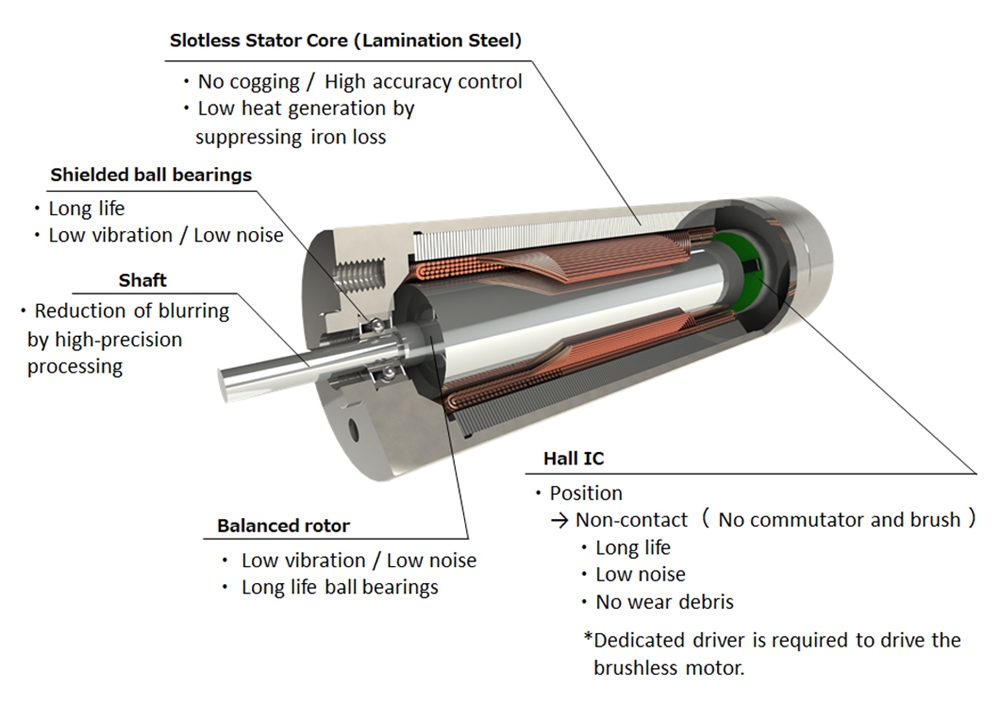 Also, if you use it at a high speed, it is preferable to use ball bearings rather than plain bearings. The higher the speed, the greater the loss of frictional resistance and the shorter the life of the motor.

The higher the rotation speed, the greater the noise and vibration related problems according to the accuracy of the shaft. Since a brushless motor has no brush nor commutator, it produces less noise and vibration than a motor with a brush that brings the brush into contact with a rotating commutator.

Speaking of an ideal motor, the size of the motor is also one of the important factors of performance. Even if the speed (number of revolutions) and torque are sufficient, it is meaningless if it cannot be installed to the final product.

If you just want to increase the speed, you can decrease the number of windings of the wire even if it is small, but it will not rotate unless there is a minimum torque. Therefore, it is necessary to devise ways to increase the torque.

In addition to using the strong magnets mentioned above, it is important to increase the space factor of the winding. We have been stating that the number of windings should be decreased to secure the number of revolutions, but it does not mean that the wire is wound loosely.

In general, the output of a motor depends on two factors: iron (magnet) and copper (wire winding). 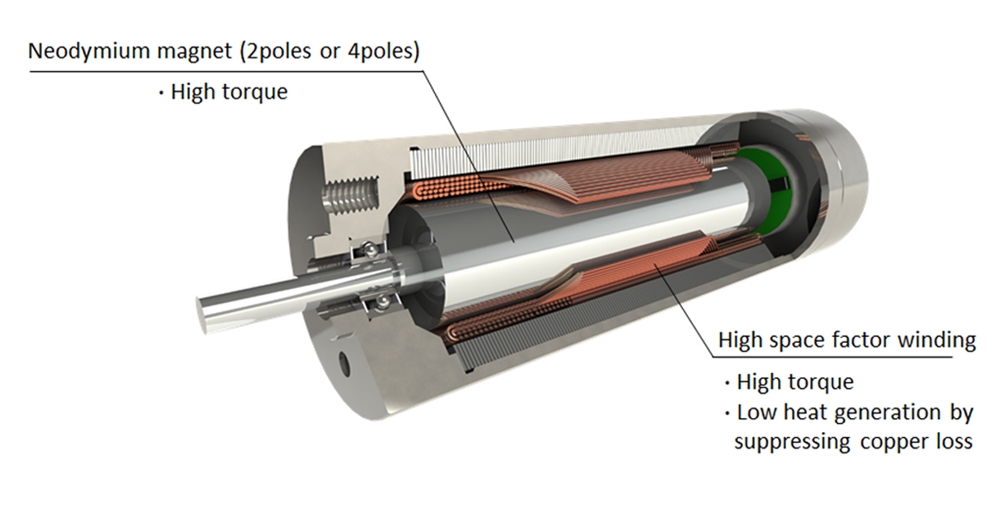 We have written about how to improve the performance of the motor so far, and last but not least, the price is also important.

If you pursue the ideal motor, it will be a small and inexpensive motor that achieves both high torque and speed. We are working hard every day to make such a dream motor, but it is necessary to know the functions (performance?) to make a selection because there is no motor that has all of them.

As for the price, if you give up some performance, you can lower the price. For example, neodymium magnets are effective in increasing torque but expensive. If you use a ferrite magnet instead, then it will be much cheaper. The same thing can be said to electrical steel sheets that are laminated to make magnetism not to leak. You can also reduce the price by using plain bearings instead of ball bearings. The price can also be reduced by using low-precision parts.

And also, the same thing can be said for each performance described in the next chapter. It is because there is always uncompromising performance to use high-performance materials and parts while there are always cheaper options. There can be no perfect motor, but there is sure to be the one that works best for you.