Smoothness and Accuracy of Revolution

In the case of a brushless motor with a slot, the attractive force between the slot teeth and the rotor magnets causes ripple at low speed. However, in the case of our brushless-slotless motors, because of the distance between the stator core and the magnet is constant in the circumferential direction (which means magnetic resistance is constant in the circumferential direction), ripple is unlikely to cause even at low speed.

The most important elements in comparing brushed motors and brushless motors are life, maintainability, and dust generation. Since a brushed motor rotates with the brush and commutator in contact with each other, the contacting part is inevitably worn off by friction.

Therefore, it is necessary to replace the entire motor, and dust generation due to wear debris becomes a problem. As the name implies, brushless motors do not have brushes, and so they have better life, maintainability, and less dust generation than brushed motors.

The state in which the rotation axis of the rotor and the center of gravity are off-center is called unbalance. When a rotor with an unbalance is rotated, vibration and noise will be generated, and they will increase as the motor speed increase.

Copper loss can be reduced by reducing the winding resistance by thickening the magnet wire. However, if the magnet wire is made thicker, it would be difficult for the winding to fit in the motor. Therefore, it is necessary to design a winding structure that fits into the motor by increasing the space factor (ratio of conductor to cross-sectional area of winding).

If the frequency of the rotating magnetic field is high, the iron loss will increase, which means a motor with a high rotation speed will generate a large amount of heat according to the iron loss. Among the iron loss, the eddy current loss can be reduced by thinning the laminated steel sheet.

The problem among heat generation is that even though an application has no restriction on the heat itself, the heat generated by the motor reduces its performance.

When the winding becomes hot, the electric resistance (impedance) increases and make difficult for current to flow, and as a result, it makes the torque to decrease. And also, when the motor becomes hot, the magnetic force of the magnet decreases due to thermal demagnetization. Therefore, heat generation cannot be ignored. 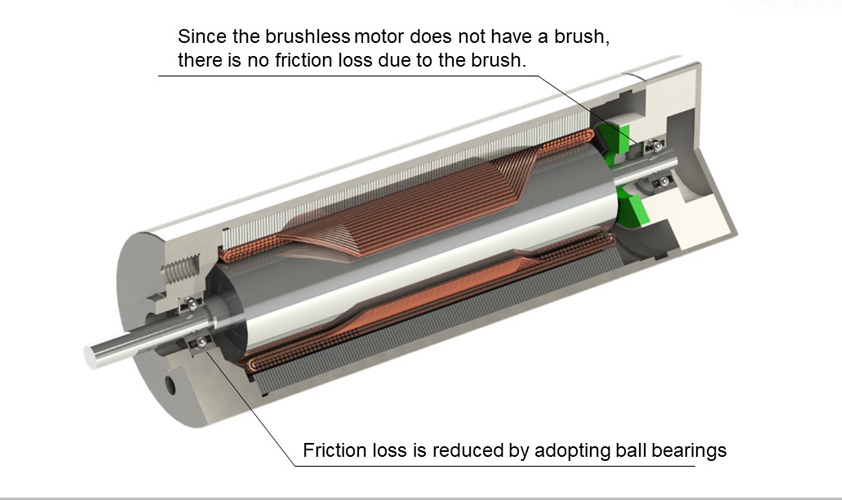 Positioning motors are used in semiconductor lithography system and FPD (Flat Panel Display) lithography system. The problem among exposure process is that optical components become cloudy by the outgas (gas) which is generated when photoresist is irradiated with light. Therefore, photoresist that generate less outgas is required.

Motors used in clean rooms are required to have low dust generation. Brushless motors are often used because brushed motors generate wear debris. If you need a motor that generates less chemical pollutants, we can offer brushless motors with chemical countermeasures made from highly qualified materials.